Our doors for 300 vehicles for Kuala Lumpur

The company Mass Rapid Transit (MRT), which manages urban transport in Kuala Lumpur, has ordered 300 vehicles with Masats doors for their new bus lines which will feed the all-new Great Kuala Lumpur underground line in the region of Klang Valley.

The MRT transport system covers areas of high population density for a capacity for 2 million travellers a day.

For its new bus lines, MRT has acquired 150 Scania vehicles and 150 Volvo vehicles with bodies designed by the Malayan coachbuilder Gemilang which will be built in Malaysia.

Masats will equip all of the vehicles with a wide swinging front door and an electric 028 c sliding rear door, all with multiplex connections to the chassis.

MRT demands the highest standards in the railway sector, which are also applied to bus doors and, therefore, the project has been developed with the highest levels of security and rigour.

It is the first major Masats order for Kuala Lumpur, which reaffirms Masats’ presence in the Asian region with significant company growth in Singapore as well as in Hong Kong, with high-performance urban vehicles. 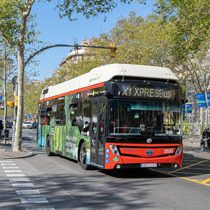